A 70-year-old Windsor woman was sentenced following a plea of guilty at Windsor Local Court on 28 June 2019 in relation to one offence for failing to provide veterinary treatment to two of her horses in November 2018.

A conviction was recorded and a 12 month community release order imposed subject to conditions that she be of good behaviour. The horse was ordered into RSPCA NSW’s custody, and veterinary costs of $2822.50 awarded.

The Court heard in agreed facts tendered on sentence that on 3 November 2018, an RSPCA NSW Inspector attended a property in Freemans Reach to investigate a complaint in relation to the condition of horses on the property.

The inspector located an adult Arab mare, Alena, who appeared to be in a very poor body condition with all hip, pin, spine and rib bones prominent, she had rainscald – including infected sores across the wither, top line and both sides of the rump area.

A second horse, a Bay Anglo Gelding, Shah, was observed by the inspector to be in poor body condition with pin, hip and spine bones clearly visible. 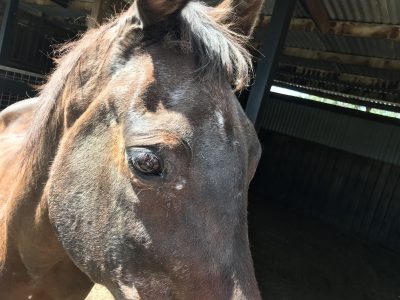 A registered veterinarian was called to attend the property and ultimately the two horses were seized so they could be provided with immediate veterinary treatment.

The veterinarian determined that both horses were very underweight and in a state of extreme debilitation and neglect. Alena weighed 238kg, 162kg under the estimated ideal weight of 400kg. She was treated for dental disease and severe rain scald.

Shah weighed 406kg, 94kg under the estimated ideal weight of 500kg, and was treated for lice. He was also treated for extremely advanced dental disease,

On 15 November 2018 the Windsor woman was informed that the Arab mare was found to be in liver and heart failure, the subject horse was surrendered and euthanised later that day.

Shah has since made a full recovery in the 8 months under RSPCA NSW care, and now weighs 464kg.

RSPCA NSW Chief Inspector Scott Meyers has commented that “RSPCA NSW reminds owners that age is not an illness, but older animals may need more veterinary treatment rather than less.

Horses make wonderful pets, but they are a lifelong commitment. Owners must seek veterinary treatment for their animals so that outcomes like Alena’s can be avoided.”

An appeal against the severity of sentence has been lodged in the District Court in July.