At the iconic Melbourne institution Lort Smith Animal Hospital no two days are the same.

Lort Smith’s exotic vet, Dr Tristan Rich restored a baby macaw to good health and out of misery following the discovery of a tube in its stomach.

The beautiful and rare bird had been seen by another vet clinic before being taken to Lort Smith. 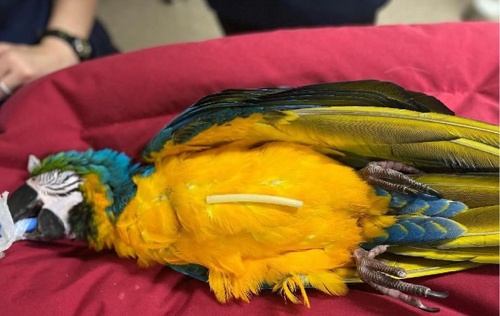 Dr Tristan Rich explained, “The baby macaw had been to another vet before coming here for vomiting, weight loss and lethargy.

“When I took radiographs a surprisingly large tubelike foreign body was visible. I was then able to take it out of the stomach using an endoscope.

“Once we removed it we could see that it was a feeding tube. The current carers had not had her long and they were not missing any feeding tubes so I suspect the tube had been swallowed while still at the breeders – sitting in there the whole time they have had her.

“It is very inappropriate for a breeder to sell an unweaned bird. We don’t recommend buying unweaned birds unless you are very experienced in caring for birds,” he said.

The good news is the baby macaw is now doing well and should make a full recovery.

The organisation receives no ongoing government funding and relies on the community and donors help deliver vital services to sick, injured and vulnerable animals.