We will look at  worm that can infest dogs, the roundworm, scientific name Toxocara canis. This is an important worm to be aware of, not only because of its effects on the health and wellbeing of dogs, but also because it poses a risk to human health.We call an infectious disease like this, one that can jump from an animal to a human (or vice versa), a zoonosis. Understanding which parasites are zoonotic is important to allow the implementation of strategies to minimise the risk of their transmission to pet owners or others that may come into contact with the pet or its environment. 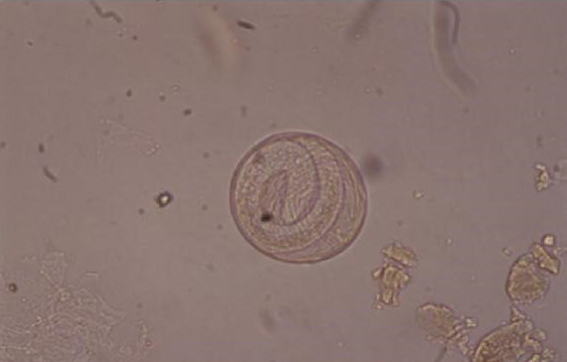 Five weeks after infestation, a dog will start shedding roundworm eggs in their faeces

The time period that elapses from when an animal is infested with a parasite to when eggs or larvae are detectable in body fluids or excretions is known as the prepatent period. It is important to understand prepatent periods when considering optimal parasite control programs.

Dogs are infested with Toxocara canis through ingestion of infective eggs or through eating an infested host animal such as a rodent (parasitologists call these paratenic hosts). Newborn pups may have already acquired a roundworm infection prior to birth in the womb (the worm larvae can cross the placenta) or soon after birth via their mother’s milk. The prepatent period for Toxocara canis varies a little depending on how the larvae are acquired, being five weeks for infestations acquired from ingesting eggs or paratenic hosts, and a little shorter (three to four weeks) if acquired in the womb or via their mother’s milk.

Roundworms are world class at reproducing, with a single adult female roundworm laying up to 200,000 eggs per day. The eggs that are shed are not immediately infectious, however they can develop to the infectious stage in as little as 2 to 3 weeks under the right environmental conditions, and may remain infectious for several years. Roundworm eggs are also resistant to many common chemicals and disinfectants and have a sticky outer coating that can make them hard to remove. Little wonder then that high rates of contamination with Toxocara eggs have been documented in soil samples taken from parks, backyards, playgrounds and sandpits around the world.

With so many eggs shed, it is not surprising that human exposure and infection occurs. A recent published study estimated that 7% of Australians have antibodies against Toxocara, indicating they are currently or have previously been infected.

Humans are infected through ingesting infectious eggs in soil on unwashed foodstuffs or unclean hands, or through ingestion of undercooked paratenic hosts (e.g. chickens). As eggs in freshly passed dog faeces are non-infectious, it poses little risk, however due to their sticky outer coat, infectious eggs may be found stuck to the animal’s coat if they have rolled in contaminated soil. However, transmission in this way is not thought to be a significant risk.

Human infection with roundworms can result in four different significant clinical syndromes, however in many cases it causes no obvious clinical signs. Patent infestations, that is infestations that result in worms reaching the intestine and shedding eggs, do not occur in humans, with disease being caused by larvae migrating through organs and the resultant immune response. The worm larvae can migrate through various organs in the body, and depending on where they roam, different signs may be seen. For example, worm larvae migrating into the eye or optic nerve can cause vision loss or even complete blindness; worm larvae migrating in the brain can cause neurological signs. Even when obvious signs are not present, scientific studies have shown a link between having been infected with Toxocara and reduced cognitive function children. A similar link has been reported for asthma in children.

Why do these numbers matter?

These numbers highlight a key challenge in the control of this parasite. To fully appreciate this it needs to be remembered that most dewormers for dogs and cats, while highly effective at killing worms present at the time of dosing, provide no ongoing protection. This means that animals in contaminated environments can become rapidly re-infested. With deworming every three months, as historically recommended, this would mean dogs may be shedding roundworm eggs for 6 of the 12 weeks between doses – not an ideal scenario given the potential consequences of roundworm infection in humans.

The key to minimising shedding of gastrointestinal worms is to deworm at a frequency that is less than the prepatent period. In this scenario, although a dog can be re-infested soon after a treatment, these newly acquired worms are killed by the next dose, before the worms start shedding eggs. For Toxocara canis, this means monthly treatment, as recommended by the Australian Companion Animal Zoonoses Advisory Panel.

Convenient monthly treatment with an endectoparasiticide that controls roundworm, like NexGard Spectra, is a simple solution to help keep dogs healthy, and minimise the risk of zoonotic roundworm infections. 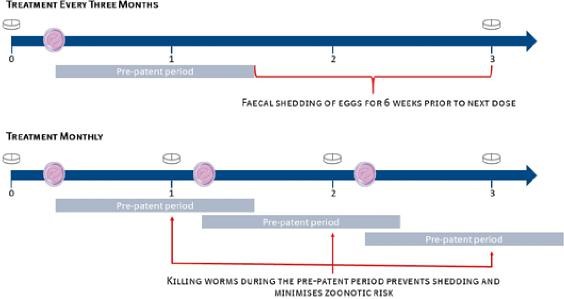 It is important to remember that regular deworming is only part of the solution. Other key considerations in controlling roundworms include: